You deserve a scientifically-correct religion.

From the Torah (Judaism), to the Qur’an (Islam), to the Buddhists texts, none of them are scientifically-correct – unlike Scientific Humanism. Believe in yourself enough to believe that you are good enough to demand a belief system that in not unscientific.

The Bible, for example, is unfortunately not as scientifically-correct as the Book of Scientific Humanism is:
Talking snakes.
Talking donkeys (Numbers 22:28.)
Talking plants (talking burning bush.)
Talking dead people (“Jesus”, etc.)
A magic man can be "immaculately conceived" by a virgin mother.
500 zombies.
A man can live inside a fish for 3 days.
I can survive my own death if I simply believe in a dead person from Nazareth.
Almost all humans and all animals died in a magic flood.
An invisible evil guy is real, and works to mess up our lives.
People have lived to be 900 years old. (Genesis 9:29.)
The earth is flat.
A magic invisible place in the sky exists, where religious Apartheid is sanctioned (Hindus, Muslims, Atheists etc. are so hated that they are not allowed to enter, ever.)
Magic is real (walking on water, etc.)
Dragons.
Invisible "demons".
Witches are real, and "never let a witch live”. (Exodus 22:18)
There’s a magic guy who has lived forever, he created the entire universe - only about 6000 years ago (the genealogies add up to 4000 years from Adam to Jesus.)
Giants are real.
An invisible magic place exists in the middle of the earth ("Middle Earth"?) where people who simply don’t think like the hero are tortured forever.
There’s an unscientific invisible thing inside us that survives our death and magically leaves our body (a “soul”) – so that the hero of the book can torture it forever if we don’t think just like he does.
A magic man can turn water in to wine.
All humans and all animals alive fit on one boat...at the same time.
Unicorns are real.
Magic invisible people that fly around with wings are real, and protect us.
Locust headed scorpions are real.

8637 Places You can improve on the Bible

Like Jesus, Buddha was allegedly conceived w/out sexual intercourse of any kind.

Suffering in your life is likely caused by something bad you did in a “previous life” – this can unfortunately be incredibly harmful to the person, and has no scientific evidence to support it.

Buddhism’s 32 signs of a great man include having a certain skin color, and hair color, and having curly hair. We can’t bring that part forward into Scientific Humanism.

The technique for choosing the Dalai Lama is well-intended, but is possibly the most unscientific selection process known to humankind.

Buddhist, and Hindu, and Jain “holy books” were given by “Nagas“ - half human and half cobra beings.

Magical beings who live up in the sky, called “devas”, are real (with no scientific evidence.)

Though well-intended, they believe, with no scientific evidence, that amulets of Buddha somehow magically protect one from diseases, accidents, etc. Can this actually be harmful to these fine people?

One form of Buddhism teaches that 32,000 foot-tall beings exist.


Islam:
"Jinns": invisible humanoid creatures that could be living in your nose right now -that are sometimes used as an excuse for one's failures.


Hinduism:
The earth sits atop giant elephants, that sit atop a giant space turtle. 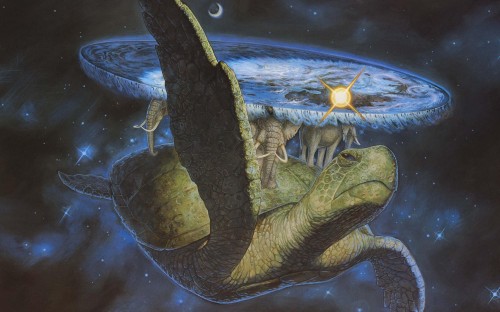