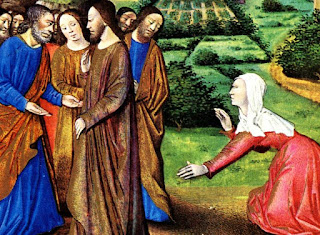 A woman that was a different ethnicity than God/Jesus had come to Jesus, cried, and asked Jesus to heal her sick daughter. But despite her desperate pleas God/Jesus refused to even talk to her, since she was from a different ethnicity. His own disciples were even less compassionate, as they even wanted to send her away. God/Jesus said "I wasn't sent to anyone but the lost sheep of the house of Israel." He also indirectly called her what was considered a racial slur - a “dog”. But she loved her daughter far more than Jesus did, so she relented, and he finally decided to help her – not because of compassion on his part, but because she showed great faith.

What do you believe should be greater, faith, or compassion? Please let us know.

Let’s have the most inclusive belief system in the world. God/Jesus was apparently against helping certain ethnicities/races, allegedly teaching "Don't [teach] the Gentiles or the Samaritans” (Matthew 10:5). Instead of exclusion, as a Scientific Humanist, you can be extremely inclusive. For example, you’d probably let ethical non-believers into “heaven”, and avoid “hell”, if it were up to you (unlike God/Jesus)! You can set a new standard for love and inclusion.

The majority of his disciples unfortunately taught “to no one except to [Israelites] alone.” (Acts 11:19). Can your heart be so big that you don’t exclude people based on their race/ethnicity – which is something they can’t control?

We know you can do this!