OLD VERSION NOT USING - Is this a better way to get into heaven than Christianity? 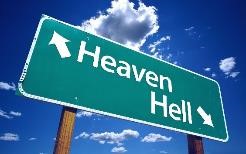 If you believe that “god is love”, then if you love god’s “children” more than even Jesus/Christians do, then wouldn’t god likely treat you better than he would treat Christians? That does make sense. If there’s an after-life judge - a “god” that judges you in the after-life, and doles out reward/punishments – wouldn’t he treat you better if you “love god’s children, equally”, rather than if you approve of a belief system (like Christianity) that sends roughly 70 billion of his “children” to brutal torture – all for just making the honest mistake of not beating lottery-like odds by picking the one “true” god/prophet (Jesus) out of the 5000+ unproven gods on offer?

There have been around 100 billion people to have ever lived, and only about 29% are Christians. So roughly 70 billion people are non-Christians, and many Bible verses say that all non-Christians deserve brutal torture, for eternity. So if you sincerely say this most-loving Scientific Humanist “prayer”, then if god exists, and is indeed a loving god, then you would have a better shot at a favorable after-life judgment than you would as a Christian who accepts 70 billion people being burned brutally alive in the Biblical “lake of fire” (just for being, say, a Hindu, like Gandhi):
"God, I love people so much that I beg you to let ethical hard-working non-believers into "heaven", and avoid "hell". I forgive you if you won't, but I believe it's the loving thing to do. Thanks."

Don’t you think that a loving god would say something like the following? “Scientific Humanism loves all my children, equally, but The Bible says that I’ll see that roughly 70% of them get burned alive just for thinking a certain way – why do you think I’d be that hateful towards my own children!?” I you assume that god would be that UNloving, and UNcaring, then wouldn’t that be disrespecting god? Disrespecting god would not be a good idea if you want a favorable after-life, of course!

It seems very risky not to take this more loving Scientific Humanist approach of “love god’s children, equally”. You would be taking the risk that god is not a loving god – that he’s willing to torture innocent people who just made an honest mistake….especially since no particular unique god has ever provided evidence of his existence to a court-room level of evidence (the level of evidence that we use to make our most important decisions.) So you have to make a decision: is god a loving god or not? We suggest that you err on the side of assuming that an all-knowing god is very loving – so loving that he loves Gandhi and Einstein just as much as he loves, say, a Christian that helped the world way less than those two people did. So loving that if a family member of yours became, say, a Buddhist (a non-Christian), that god would let them into “heaven”, and avoid “hell” - if they were at least an ethical person.

So if you believe that god is a loving god, then Scientific Humanism would give you a better shot at getting into heaven than even Christianity does. But aside from that selfish reason, isn’t it just the morally right thing to do to “love god’s children, equally”, and thereby move beyond a belief system that would send all ethical Muslims, Hindus, Buddhists, etc. to brutal torture? We love Christians, Muslims, etc., and want to show them an alternative, more loving belief system.

Let us know what you think.