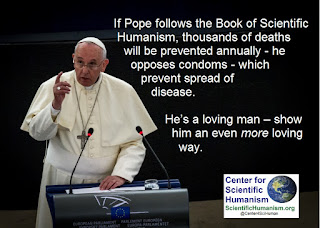 If Pope Francis follows the Book of Scientific Humanism, then thousands of deaths will be prevented annually - he opposes condoms - which prevent spread of disease. He's a loving man, let's show him an even more loving way, and save thousands of lives in the process. The death toll in Africa alone is many thousands per year - easily preventable by following the Book of Scientific Humanism. It says that condoms are a great way to prevent the spread of disease, and has no religious reason for preventing their use, unlike the Pope.
Scientific Humanism believes that saving lives is more important than religious beliefs.
What can you do to save innocent lives? Please let us know.
at 4:30 PM